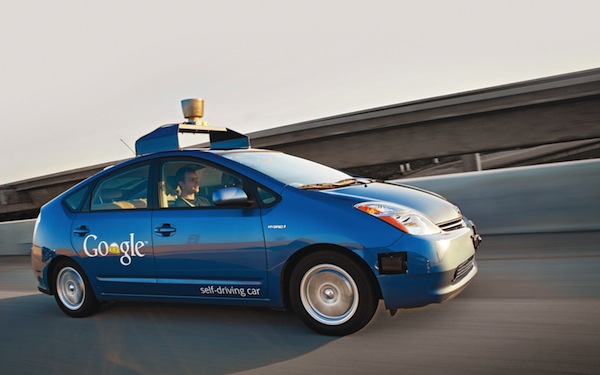 Google made big news last year when it announced that its self-driving cars had logged 300,000 miles, all of which were accident free. Suddenly, self-driving cars weren’t science fiction anymore. People began to imagine futures in which they hopped in, entered a destination, and kicked back. We’re not there yet—autonomous vehicles will have to log an estimated 300 million miles before we can be confident they’re as safe as regular drivers¹—but we may be within a generation or two. It’s entirely possible that babies born today will be among the last who feel they have to learn how to drive.

Just as the automobile began reshaping cities a century ago, the self-driving car will change urban areas yet again. But like the advent of the automobile, it won’t happen all at once. The revolution will happen in stages, and we’re already in the first. Cars can now park themselves, keep you in your lane, brake when traffic slows, and accelerate when it moves again. Many expensive cars do all of the above and more. Luxury vehicles are often testbeds for new technologies, and it’s unlikely that full autonomy will be any different. The first fully autonomous car for mass consumption will probably be quite expensive. When the first of its kind leaves the dealer lot—with the only driver input being a destination—we’ll have entered the second stage.

When self-driving cars are the rule, not the exception, we’ll be in the third stage. There’s no doubt the technology will trickle down—perhaps strikingly fast in this case, if the trickling down of today’s electronic nannies is anything to go by. Soon, new cars in all price segments will drive themselves. Purists will howl, but commuters will rejoice.

The benefits of stage three should be obvious to anyone who regularly drives. Parking will be a breeze—the car will drop you off and go find a spot on its own. If automation is combined with a smart parking system, traffic in big cities could drop by 30 percent—the proportion of cars in city centers currently circling for a space. Commuting, too, won’t be half the chore it is today. That time wasted in traffic? Wasted no more. Take a nap, eat breakfast, catch up on reading, text your friends.² You get the idea. Unless energy prices skyrocket, those far flung suburbs will regain some of their luster. The surge in commuting coupled with the higher densities allowed by self-driving cars³ will make today’s crowded freeways seem spacious by comparison.

We can feel pretty confident about these predictions, I think, because they’re pretty similar to how we use cars today. At some point, though, we’ll start thinking about cars differently. If cars can drive themselves around, passengers or not, what’s the point in owning your own car? Why not lease one from a pool? Welcome to stage four. Schedule it for your daily commute—perhaps with a price break for carpooling—and request one on-demand for more unpredictable needs. If wait times are short enough, it’ll be an attractive proposition.

Automakers, of course, have the most to lose and the most to gain. If they navigate this transition poorly, they won’t fare well. People will need fewer vehicles if they’re buying timeshares, and the market for automobiles will plummet. But if automakers can tackle the logistics of a such a system, they’ll make a killing.

At this point, the lines between private and public transit will start to blur. What I described above bears a resemblance to personal rapid transit, or PRT. A dream of the 1960s and 1970s, PRT consisted of small pods, hailed on demand, that whisked passengers to their destinations along monorails or traditional rails. The main difference between PRT and self-driving car subscriptions is that the self-drivers won’t need new tracks or dedicated rights-of-way—they can use existing roads. The efficiencies in this system will be massive. Cars can be delivered and routed as needed, and they can be used more consistently throughout the day, picking up new passengers after dropping others off. Parking lots can be largely eliminated and replaced by central facilities where the fleet will return for refueling and maintenance. Streets can be narrowed, asphalt lots reclaimed.

There is one big difference between self-driving car systems and PRT, though. PRT, as it is typically envisioned, is publicly-owned and maintained. In all likelihood, that won’t be the case with self-driving cars. Automakers and rental car companies are best positioned to take advantage of the self-driving revolution. Both already have portions of the subscription part down—leases and rentals—but the logistics will pose a real challenge.

Regarding privatization, Allison Arieff, editor at SPUR, raises an important point—how will self-driving cars influence social equity? “If you could afford a BMW before,” she writes, “you’ll be able to afford a subscription to BMW’s suite of offerings in this scenario.” She’s absolutely right—there are certain to be varying price points. That’s just how markets operate. But don’t count on the self-driving market looking exactly like today’s auto industry.

The strongest competitor will be the company with the widest network and the highest availability of vehicles. In this regard, the market for self-driving vehicles will be more similar to the cell phone industry than today’s automotive industry. Today, vehicles are sold on the strength of their quality and features. Tomorrow, subscriptions to vehicles will be sold based on the reach and availability of their network.⁴ Within each network there will certainly be a wide-variety of vehicles available depending on how much you’re willing to pay. But niche automakers won’t succeed unless they dramatically scale up their network.

There are potential downsides to self-driving cars, of course. It’s very likely that the poor will be left out yet again. Cars are costly to buy and maintain. Will self-driving cars be any different, cost-wise? The poor probably won’t be able to afford plans that provide high availability, limiting their mobility. Companies with the widest networks and most cars will probably attract the most customers. Smaller players will be either forced out or bought out, concentrating today’s highly competitive automotive market; tomorrow’s self-driving car industry could quickly devolve into an oligopoly. When that happens, be prepared for wave after wave of profit-driven price-hikes.

Throughout all this, cities will be adapting. For a brief period, it’s possible that cars will function in cities the way we had always hoped they would—traffic will flow more smoothly, parking be less of a headache. But that will only be for a brief window. Revolutions in mobility have a tendency to decentralize populations rather than concentrate them. Sprawl may become even more acute than it is today.

When people stop owning cars, the line between public and private will blur further. Who will pay for the upkeep of roads, consumers or companies? What about parking spaces? Will private companies be able to take advantage of free parking, as individuals do today? Or will free parking be a thing of the past?

Parking lots may become passé, but there will be a new need for vast facilities to store, clean, and maintain self-driving cars. Given the realities of real estate, those facilities will probably sit on the outskirts of town. Highways would still be jammed during morning commutes, only there may be two pulses of traffic instead one—the first consisting of empty cars fetching their masters, the second ferrying them to work. The added convenience and efficiency of self-driving cars could raise demand, too, bringing even more cars on the road. Self-driving cars can make more efficient use of roadways, but those benefits may quickly be erased. Prepare for another round of highway expansions.

Where’s public transit in all of this? That’s a good question, and one I’m not sure anyone has adequately answered. It’ll probably still exist, though in what form I have no clue. Who will ride it is similarly up in the air, but motivations will probably remain the same—time, expense, and convenience. If mass transit can best self-driving cars at one or more of those, it’ll retain its place in the mix.

Two or more of these stages in the self-driving revolution will probably happen during our lifetimes. Changes to cities will lag, though not by much. When the automobile first caught on, cities quickly changed pedestrian laws, made way for parking, and, within just 50 years of the first mass-produced automobiles, tore down entire neighborhoods to build highways. Will the self-driving car precipitate such drastic changes? Perhaps. We’ll find out soon enough.

Marchetti’s constant, or why the 30 minute commute is here to stay

When everyone lives in a city